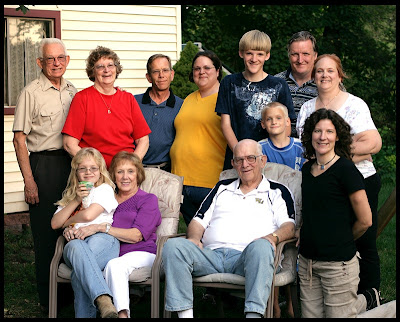 Nine years ago next month, my brother and only sibling stopped talking to me. It was over some ridiculous little thing--probably long forgotten by him. And because of this, I also lost touch with my three nieces and their families. I thought of my brother often and really missed him but had resigned myself to the fact that I would never see him again.

Then along came Facebook. Through FB I reconnected with one of my nieces. She informed me that she was getting married next summer and wanted me to come to the wedding. I told her that I would love to but didn't want to make waves. She told me that if her father couldn't get over this silly little tiff with me and accept who she wanted to attend her wedding then he didn't have to come to the wedding! Wow.

Since I was cleaning out my house and had a bunch of family heirlooms which I wanted to divide among my kids and my nieces, I asked my niece if she would like them. She said she would love to have them and would come down with her hubby to be and daughter to get them. My son and his kids made the trek too so that we could all be reunited for a couple of hours. It was a great get together. Unfortunately, my daughter and my two other nieces weren't part of the get together.

Karen was flying in to Detroit on Sept 3rd. Since my niece lives about 20 minutes from the airport, she asked us over for dinner so we could see the other nieces and Karen could see them too. BUT--my niece lives with my brother. She said that he could either stay or leave for the evening. And he told her that he would like to stay!!!!! I was thrilled.

So, about 20 minutes after we picked Karen up at the airport, we arrived at my brother's for the first time in 9 years. I was a bit nervous but we had all decided that we would just act like nothing had ever happened. We walked in, he and I hugged, and the last 9 years just melted away. We all had an amazing evening, laughing, reminiscing, and catching up. The only down side was that my youngest niece was sick and couldn't come over. Also, Dave and his family weren't there to see my brother and cousins.

Unfortunately, 6 days later we moved to Florida. So now, instead of being an hour and a half apart, we are now twenty three and a half hours apart. And my brother, won't travel much beyond Pigeon Forge and Gatlinburg, Tennessee so I guess I will be the one who has to do the traveling. But I'm game, believe me.

Here is a picture that I never ever thought would be taken. I will treasure it always. 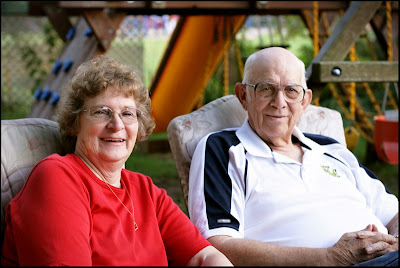 nothing like a happy ending before it was too late,

Totally agree with Queen! I'm so glad for you.

Wow! That photo is so clear and perfect! So glad that you have reconnected.

What a touching story. So glad you all were reconciled.