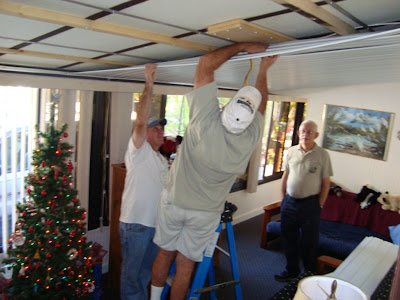 Ok, so some of you remember my tales of woe when we were remodeling down here--long before the days of Bob the Builder--back in the days of Bob the Blind Guy. On November 19, 2007, I posted about all the problems we were having plus the fact that our overhead fan and light hadn't worked since the previous spring when Rusty and Dusty had put in our new ceiling, wall board etc. So that would have been April 2007. Well, we have complained to them on numerous occasions at which time they promised to come out. Well, guess what--they showed up unannounced this morning. Luckily we were here. After they tore down half of the ceiling and have styrofoam spread all over the place, they THINK that they have found the problem and rectified it. Of course it meant putting in wire (which obviously was there at one time because the fan worked before April 2007), putting the ceiling back up, and re-wiring the fan. But hey, even though the ugly yellow cord is hanging down beside the window and plugs in to the outlet behind the entertainment center, it is up and working!! Of course after almost 2 years of non use and the humidity which we are known for down here, the blades are now sagging dangerously low and could really clip anyone over the size of 5'10" so now we have to go buy new blades and attempt to put them up. Maybe that will be a good project for #1 (and only ) son when he comes to visit next week.

And then, remember my tale of woe about my new stove a couple of weeks ago? I was so thrilled to have a new oven which I could actually bake in. Well, yesterday I went out and spent a small fortune on ingredients for Chex Mix and several kinds of Christmas cookies. Last night I decided to make the Chex Mix. It says to bake it at 250 for an hour and 15 minutes stirring every 15 minutes. I checked it at 15 minutes and things were getting a little toasty. I checked again at 25 minutes and most of it was burnt to a crisp. The thermometer in my oven said that even though it was set at 250, it was actually 425 degrees!!! So, here I set with my small fortune in Christmas cookie ingredients and company coming next week and an oven which burns anything it sees! Arrrggggg!

By the way, please excuse the fuzziness of the picture. I took it kind of quickly and about scared the you know what out of Rusty as he was doing some rewiring at the time the flash went off!!

I beginning to believe Florida is the destination of crooked contractors! You wouldn't last in the business here if you did bad work. How frustrated you must be.

Holy cow...2 years???? That's ridiculous! I hope you get things sorted out..especially with that stove, I had an oven that was off and it drove me crazy..of course mine fluctuated, if it had stayed the same it might have been a bit easier to deal with..but what you have is a HUGE difference...I hope you can get it fixed.

It must be the karmic balance again -- crappy contractors balanced with the most beautiful island on earth! As Roseann Rosannadanna used to say, it's always something!

That is major suckage.I hate to say this,but you're making us feel lucky.I would be soooo pissed over the stove tho!!Give somebody Hell!

Thats so not right what you two are dealing with but your right,crooked contractors are many here in Florida. It'd be great to find a trusty one. Hope everything works out for you both:)

Oh man... sounds like your thermostat on the stove is WAY off. Hope you get it worked out. Sorrrrry....

Oh dear...Now is not the time of year for these kinds of problems..I hope you can get this all squared away....

sorry...but I LOL really hard about scaring the you know what out of him when the flash went off....aaaahhh I hope Mr. The Guy that you called After the Guy you CAlled can come out and reset the stove!!!!!

I have to agree with Gayle about those contractors. Good grief snowbird, will it ever end?