Every summer for years I volunteered on the Annual BGSU Hockey Golf Outing. This was a time when many of the BG Hockey Alumni would come back and would be joined by community people for a day of golf, a lot of fun and a great fundraiser. I cooked many a brat and hamburger for these guys. A few years ago BGSU decided that all of the athletic teams had to have a joint golf outing fundraiser since they were kind of draining the local merchants dry for donations. Then a couple of years ago, the hockey alumni decided they still wanted a day of shinny hockey, golf and fun even if it couldn't be a fund raiser. My friend, Marta, has been very active with the hockey program and these outings for many years. The annual outing was today so she invited me to come up this morning to see some of the players who I knew from years past. I saw quite a few of the players I knew when they played at BG. There was one guy who came back who became quite the local hero this summer. Since he would have been inundated with fans, it wasn't advertised that he was attending but Marta told me. So of course I took my camera and of course after I got my usual big hug from him, I had my picture taken with him. Meet Dan Bylsma, Head Coach of the Stanley Cup Winning Pittsburg Penguins. 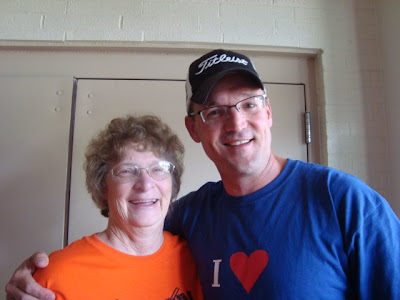 He looks just the same... and so different! How did 25 years go so quickly!??

Karen, it hasn't been 25 years. He graduated from BG in 1992. But yes, he hasn't changed at all--in looks or personality.