After we finally got settled into our new home, I began to feel the need to volunteer again--preferably with animals.  Since the Wildlife Rehab place is too far away, I opted to turn my volunteer application in to the local Pet Smart which had a no kill dog and cat rescue and adoption organization.  Actually I turned my application in twice and never heard anything back.  So, I went online once more and found another place--East County Animal Rescue or ECAR for short.  I sent them an email late one night and heard back before I got up the next morning!!  We set up a time for my training and I became a kitty volunteer--just like that.

Yesterday was my first shift.  I thought I was going to be alone but as it turned out another young lady was there.  She is a college student and wants to eventually go to vet school.  Like many of San Diego's young people, she is an "army brat" or maybe a "navy brat". I didn't really ask which.  Anyway, I was glad she was there as she helped remind me of some of the things that needed to be done.  My shift is from 10-2 on Wednesdays.  The very early shift must clean all of the cages top to bottom but my shift just has to check food and water, clean litter boxes and then spend the rest of the time playing with kitties.  Ah, doesn't get much better than that!

We had five kittens and cats to care for yesterday.  Yvette, the ECAR founder and manager, checked in and said she was bringing 5 more kittens today.  Wish she had brought them yesterday!! Anyway, I still had my hands full.

Every kitty who comes in is given a name.  That doesn't mean that this is their forever name but it does help us to keep them straight.

This is Barbara who is about 2.  She was found with a litter of 4 kittens in "The Bushes" wherever that is.  So, that is why she was named Barbara.  Her offspring were named Jeb, Walker etc. You get the drift.  Last week, Barbara did nothing but sit up on the counter and just stare at the world.  This week, she actually got down on the floor and played a bit.  And she begged to be brushed.  Such a nice girl. 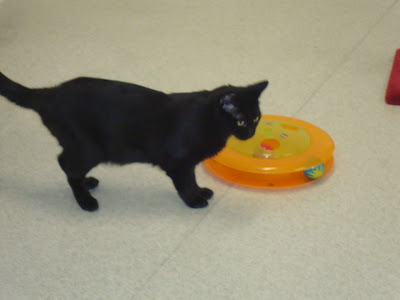 This is Rue.  She is also a couple of years old and was found with 4 babies.  When 3 orphaned babies came in, she adopted them and nursed all seven.  Yesterday she did nothing but climb to the highest point in the cat tree and sleep, sleep, sleep.  I guess after raising 7 kids, I can totally understand. 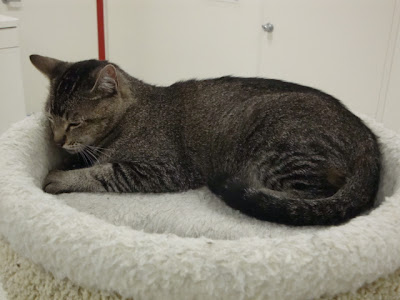 This is Hunter.  She was the youngest of the crew and is actually one of Rue's kids.  She is a bit smaller than she looks here.  She was so playful.  Of course the grownups wanted nothing to do with her.  Luckily she had Manny who is a bit older to play with. 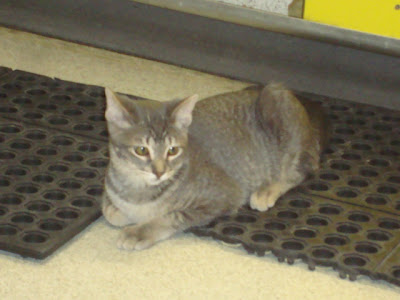 This is Manny.  I love the bullseye on his side.  There is an identical one on the other side.  He enjoyed roughhousing with Hunter but often came out the winner of the battles. 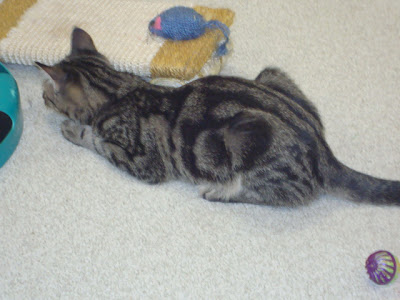 Manny and Hunter taking a break. 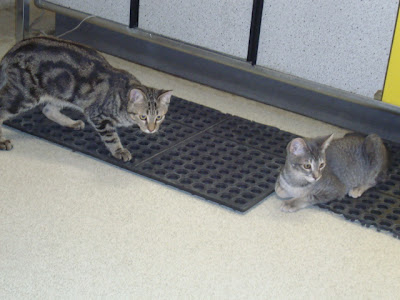 Manny trying to get away from it all. 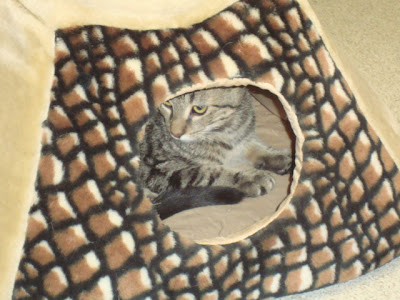 And last but not least is Jeanne.  She is such a pretty girl.  She was found along with 3 other adult mamas found stuffed in a cage on a horse farm hoping someone would find them.  Luckily someone did.  It is thought that they were all recent mamas so heaven only knows what happened to the babies.  Anyway, Jeanne is such a sweet, affectionate girl.  She discovered my lap and spent most of the time there.  And I didn't mind one bit! 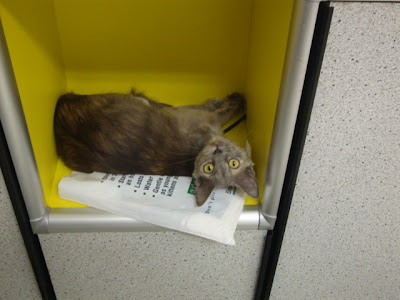 I am looking to adopt a forever kitty of my own.  I would like a Maine Coon or Maine Coon mix.  ECAR has one.  Kitty Girl was abandoned when her family moved.  She is at another ECAR location in Santee.  I've been over to visit her a couple of times but she just hasn't warmed up to me at all.  Even though she apparently did get friendly in her foster home, she hasn't been like that in the store.  ECAR would like me to foster her for awhile to see if she will settle down but I don't really think I want to.  I want a kitty who will be friends with anybody who walks in the door (especially the grandkids) and I don't think that will happen with Kitty Girl.  I do hope she finds her forever home though. 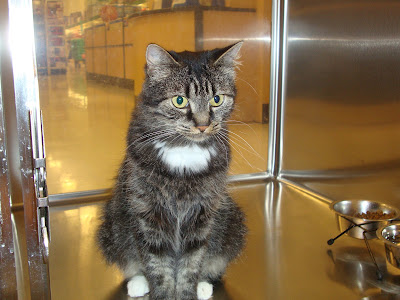 So, there you have it.  I am back volunteering, getting my critter fix, and I couldn't be happier.

Oh, and remember the first place I turned my application in to???  They finally got ahold of me the day after I started at ECAR.  Oh well, their loss I guess.

What an awesome place to continue your volunteer work! I'm afraid I would end up with way too many cats in my home because I would love them all!!

All the kitties are so cute! I can see you are going to love your time there. :) I know the kitties will love you.

Thank you for doing this...cats have a special place in my heart....Michelle

How wonderful for you (and the kitties!) that you have found a place to share your love. =)