I Am So Proud of This Guy!

For many years my Hearing Impaired students wrote weekly letters and made posters for the Bowling Green State University hockey team. And for many years, some of the players would come down to visit the kids. Some even came down and worked in my class to earn class credits. Of course Mr. Snowbird and I had season tickets to BG hockey for many, many years and traveled all over cheering the team on. Because of all this, I got to know many of the players and their parents quite well. One of those hockey players was a young man by the name of Dan Bylsma--or Danny as we sometimes called him. Dan came down to my class a couple of times and even helped out when we had Deaf Awareness Day at BG. He was so good with the kids and the kids loved him. 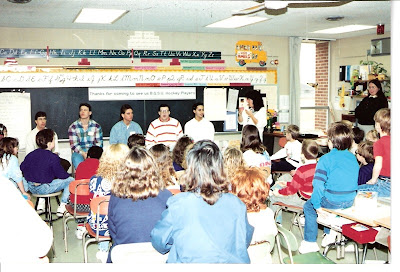 (Not the best picture of Dan but he is the one in the red and white striped sweater.)

Dan was not one who we thought would ever go on and play in the NHL but he worked and worked and sure enough he ended up playing with the Mighty Ducks and the Kings. He struggled through many injuries but he played as long as he could. He and his dad, Jay, co wrote several very inspirational books about playing sports. I would recommend them to any parent who has a kid playing sports. The picture at the top of the page shows us with Dan and Jay when they came to BG for a book signing. We were lucky enough to have dinner with Dan and his parents that night.

After his playing days Dan then went into assistant coaching. Last year he got the job of Head Coach with the Pittsburg Penguins farm team in Wilkes Barre, Pa. In February of this year, the head coach of the Penguins was fired and Dan was hired as interim coach. In his first 25 games he had a record of 18 wins 3 losses and 4 ties. He totally turned the team around and got them into the Stanley Cup playoffs. Last night the Penguins earned a spot in the finals. Dan will be going to the Stanley Cup Finals as a first year coach! Needless to say, he no longer has the title of Interim Coach. Now he is simply the Coach!!

The Penguins will be playing the Detroit Red Wings in the finals. I have long been a Red Wings fan but I'm afraid that my loyalties will be with the Penguins this year. Go Danny. Go Pens!

What a nice story about Dan. Shows you how small the world really is.

Wow what a great post, and neat to know that he is community oriented!

Hi, Gayle wanted me to read this post, as we are friends of hers, and big hockey fans up here. So I finally remembered to show it to my husband, and he said he is pretty sure that he played against him when they were both in the East Coast Hockey League. My husband played for the Raliegh Icecaps, and Dan played for Greensboro,NC team. That was back in 1992 for a couple of years. Small world for sure!